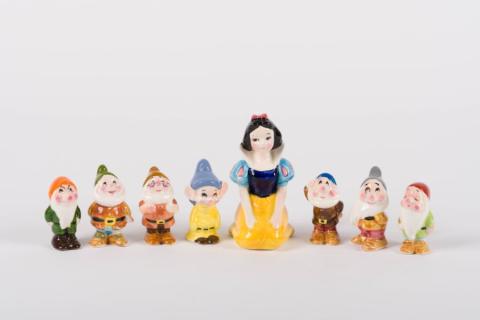 A set of eight ceramic figurines inspired by the 1937 Disney Studios film Snow White and the Seven Dwarfs. Featuring Snow White in a unique kneeling pose and each of her seven dwarf friends, the set is marked as "Walt Disney Production Japan" on the underside of each figure. It is likely that this set is from the 1970's, when Japanese production was more common with manufacturers such as Enesco. Snow White measures 2”x2”x3.75” tall, and the dwarfs measure 1.25” at the widest and 2.25” at the tallest. The set is in good overall condition, with light wear and minor imperfections in the glaze on several pieces.