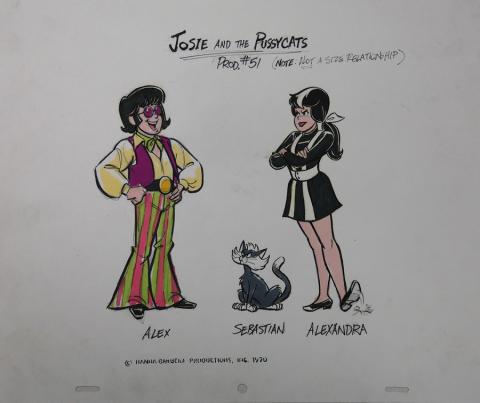 An original model drawing, also used as a promotional pitch image, from the Hanna Barbera Studios series Josie and the Pussycats (1970-1973). Featuring the standard designs for Alexander Cabot III, Alexandra Cabot, and their cat Sebastian, the drawing was created at the studio and used during the animation process. Model drawings are copied and distributed to animators to ensure consistent character design. This particular image was regarded highly enough by the studio to be used as a promotional image to pitch the show to networks. Measuring 10.5"x12.5" overall, and with an image measuring 8.5"x8", the rare publicity model drawing is in very good condition.