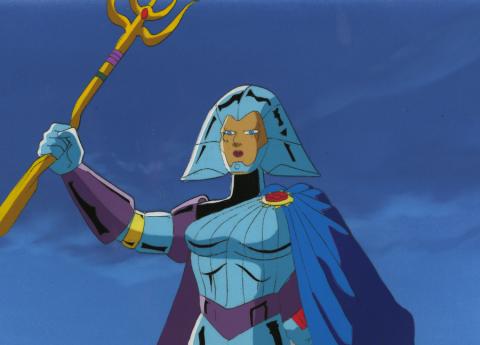 This is an original cel and background set-up from the Marvel Studios production of the X-Men: The Animated Series episode, Dark Phoenix Saga Part 4: The Fate of the Phoenix. This setup features Lilandra standing in front of a dark sky,, and was created at the studio and used during production. The overall measurements of the piece are 10" x 14" and the image itself measures 6" x 8". The piece is in very good condition. The cel and background are from a matching scene, but there is a missing cel overlay of the interior of the Shi'ar ship that appears during this scene in the episode.

The artwork was published in the book "X-Men: the Art and Making of the Animated Series" and appears on page 183.