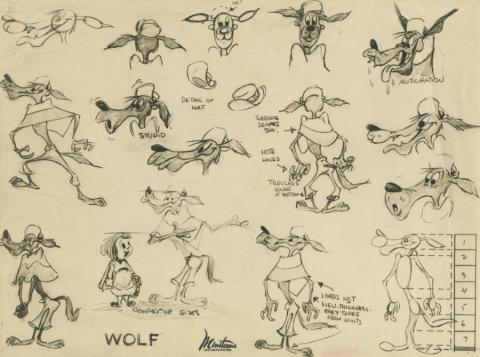 An original photostat model sheet from the little known animation studio Minitoons Incorporated (1940s-50s). The studio typically made animated commercials, but this model may be from an unfinished animated film as well. Featuring various models of the Wolf, along with an image that shows his comparative size to Red Riding Hood, the model sheet was created at the studio and used during the developmental stages of the project. Measuring 9"x12" overall and with the character image measuring 9"x12", the model sheet is in very good condition with minimal edge wear including some small tears, light creasing on the corners, and pinholes on the top corners from studio use.