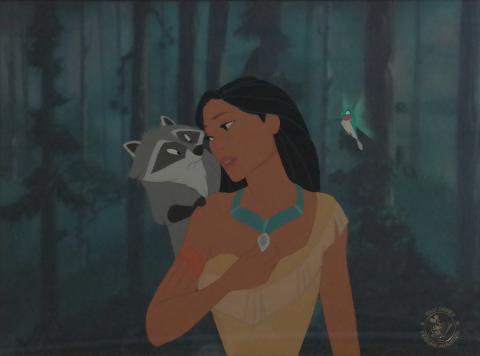 This is a limited edition cel from the Walt Disney Studios production of Pocahontas (1995). This hand-painted limited edition features Pocahontas, Flit, and Meeko and was created by the studio as a gift for the cast and crew that worked on the film. The studio would decide on a few iconic images from each film and offer them to the crew, and they would only produce as many of each limited edition cel as the employees would order, making these employee limited editions much more rare than limited editions made for the general public. The overall measurements of the piece are 18.75" x 23.5" framed with mat opening measuring at 12.5" x 17" and the image itself measures 12.5" x 17".