Get the Message Production Cel and Background - ID: maydis118 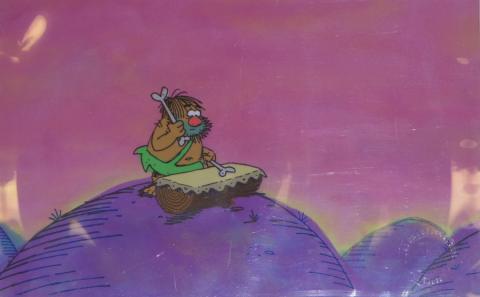 An original production cel and background setup from a Les Clark directed 1970s Walt Disney Studios animated educational film called Get the Message. Featuring a caveman playing percussion on a makeshift drum, the setup was created at the studio and used during the animation process. Measuring 14"x18" matted, with mat opening measuring at 7.75"x12.25", and with an image measuring 7.75"x12.25", the artwork is in good condition with some surface wear to the cel. There are some reflections seen in the image due to photography, they are not areas of damage.